The State of Palestine is a modern de-jure sovereign state in the Middle East recognised by 136 UN members and with non-member observer state status in the UN since 2012. The term “Palestine” has been associated with the geographical area that currently covers the State of Israel, the West Bank and the Gaza Strip. Most of the areas claimed by the State of Palestine have been occupied by Israel since 1967, in the aftermath of the Six-Day War. Since ancient times Palestine has been a crossroads between Asia, Europe, and Africa.

Described as one of the most troubled corners of the planet, travelling in Palestine can be challenging. Ancient Jericho is believed to be the oldest inhabited city in the world with the oldest known protective wall in the world. Archaeologists have unearthed the remains of more than 20 successive settlements in Jericho, dating back to 9000 BC, almost to the very beginning of the Holocene epoch of the Earth’s history. The city of Bethlehem has more than two million visitors every year and The Church of the Nativity is one of the major tourist attractions. It stands in the Manger Square, over a grotto called the Holy Crypt, where Jesus is believed to have been born. Christmas is celebrated three times a year in Bethlehem:
Catholics and Western denominations celebrate Christmas on December 25, Greek Orthodox followers celebrate on January 6, and Armenians celebrate on January 18.

Palestinian cuisine is similar to other Levantine cuisines, including Lebanese, Syrian and Jordanian. It is a diffusion of the cultures of civilisations that settled in the region of Palestine, with strong influence from Turkish cuisine. Some recipes I came across include Kubbi balls (fried spiced minced meat croquettes), Adas (lentil soup), Manakish (pizza), Musakhan (roasted chicken baked with onions, sumac, allspice, saffron, and fried pine nuts), Mansaf (lamb cooked in yoghurt), Mujaddara (lentils with rice & onions) and Sumaghiyyeh (beef stew with beans, sumac and tahina). I decided to make Labneh (cheese made from yoghurt) with pistachios, parsley, lemon and sumac dip served with freshly made pitta bread. It is commonly served for breakfast among Palestinians in the West Bank and the Gaza Strip. It had a similar taste and texture to cream cheese and we thought it was delicious, especially with the homemade pitta bread.

To make the labneh:
Place sieve over a large bowl and line it with cheesecloth in a cross formation (so you have two layers of cheesecloth lining the bottom of the sieve)
Add a pinch of salt to yoghurt and stir through
Scoop yoghurt into the cheesecloth-lined sieve
Gather the edges of the cloth and tie with kitchen string to form a parcel
With the sieve resting over a large bowl, place in the fridge and let drain for 5 – 7 days. The longer the yoghurt drains, the thicker the labneh consistency will be. It should have the consistency of cream cheese
Gently squeeze out the excess liquid and remove labneh from cheesecloth and place in a bowl

To make the Pitta bread:
Put 1 cup lukewarm water in a large mixing bowl, add yeast and sugar
Stir to dissolve and add the wholemeal flour and 1/4 cup all-purpose flour and whisk together
Put bowl in a warm (not hot) place, uncovered, until mixture is frothy and bubbling, about 15 minutes
Add salt, olive oil and nearly all remaining all-purpose flour (reserve 1/2 cup)
With a wooden spoon or a pair of chopsticks, stir until mixture forms a shaggy mass
Dust with a little reserved flour, then knead in bowl for 1 minute, incorporating any stray bits of dry dough
Turn dough onto work surface and knead lightly for 2 minutes, until smooth
Cover and let rest 10 minutes, then knead again for 2 minutes
Try not to add too much reserved flour as the dough should be soft and a bit moist
Clean the mixing bowl and put dough back in it
Cover bowl tightly with plastic wrap, then cover with a towel
Put bowl in a warm (not hot) place and leave until dough has doubled in size, about 1 hour
Pre heat oven to 240 c
On bottom shelf of oven, place a heavy-duty baking sheet or ceramic baking tile
Punch down dough and divide into 8 pieces of equal size
Form each piece into a little ball
Place dough balls on work surface, cover with a damp towel and leave for 10 minutes
Remove 1 ball (keeping others covered) and press into a flat disc with rolling pin
Roll to a 6-inch circle, then to an 8-inch diameter, about 1/8 inch thick, dusting with flour if necessary
Carefully lift the dough circle and place quickly on hot baking sheet and place in the oven
After 2 minutes the dough should be nicely puffed
Turn over with tongs and bake for 1 minute
The pitta should be pale, with only a few brown speckles
Transfer warm pitta to a napkin-lined basket and cover so bread stays soft
Repeat with the rest of the dough balls

When you’re ready to serve the labneh:
Toast the pistachios in a pan then chop into small pieces
Fill a small serving dish with labneh
Sprinkle pistachios, parsley, lemon zest and a pinch of sumac over the labneh. Drizzle the olive oil over everything
Serve with fresh pitta bread and crudités

Switzerland or officially the Swiss Confederation, is the best place to be born in the world, ranking number 1 in the EIU ‘where to be born’ index (previously known as quality of life index).
The Swiss Confederation was established on 1 August 1291, which is celebrated annually as the Swiss National Day. It has not been in a state of war internationally since 1815 and ranks number 5 in the Global Peace index.

Some random interesting facts
The Swiss eat more chocolate than any other nation in the world, 11.3 kg per year.
One is never more than 10 miles from a lake in Switzerland.
In Switzerland, it is illegal to keep just one guinea pig. They must be kept in pairs.
Albert Einstein came up with his theory of relativity and the formula E=MC2 in Bern, Switzerland.
The Sonnenberg tunnel in Lucerne is able to house up to 20,000 people for an extended period of time as a fallout shelter. It serves as the world’s largest nuclear bomb shelter.
The Dalai Lama owns the smallest vineyard in the world, which is located in Switzerland.
The most expensive hotel room in the world is The Royal Penthouse suite at Hotel President Wilson in Geneva. Bill Gates and Michael Douglas have both been residents. At $83,000 per night you can enjoy your own private elevator, gym, 12 bedrooms and 12 marble bathrooms, a Steinway Grand Piano, and a panoramic view of Lake Geneva.

Swiss cuisine shows many regional influences as well as French, German and Italian. Traditional dishes include Rosti (fried grated potato), Papet Vaudois (potatoes, leek with sausage) , Zürcher Geschnetzeltes (veal and mushroom in a cream sauce), Bűndnernusstorte (caramelised nut filled pastry) and Zopf (plaited loaf). Although I had a recommendation from Valerie who I had met on holiday, my friends and family well know that I am addicted to cheese, so there really was only one recipe for me to cook; it had to be Fondue! My sister and brother in law joined us for the evening and suffice to say, it was truly scrumptious.

Half the garlic and rub it around the fondue pot
Dissolve the cornstarch in the kirsch
Place the fondue pot on the stove over a low heat
Pour the wine into the fondue pot and bring it to a simmer
Gradually add the grated cheese, stirring continuously with a wooden spoon until it melts together.
Add the kirsch and the pepper.
Transfer to the serving stand, with the burner on a steady temperature.
Serve with the cubed bread. 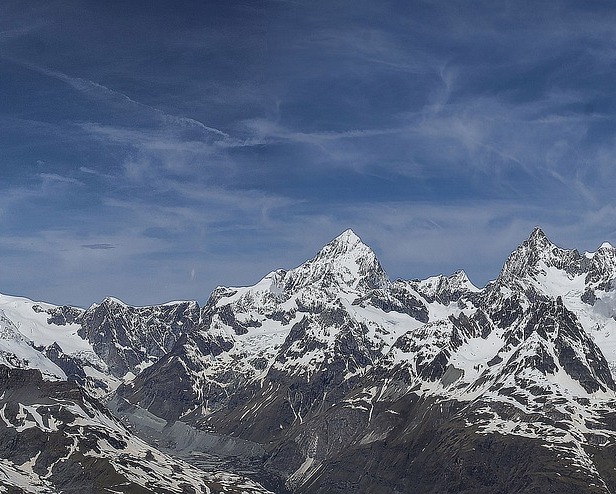 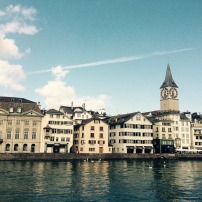 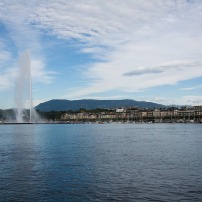