March 25, 2016January 31, 2017Leave a comment
Republic of the Congo, not to be confused with the Democratic Republic of the Congo is situated in Central Africa.  Sadly neither country have ‘the Conga’ as their national dance (which originated in Cuba!).  The capital, Brazzaville, is located on the Congo River, in the south of the country, immediately across from Kinshasa, the capital of the Democratic Republic of the Congo.  This is the only place in the world where 2 capital cities are situated on the opposite banks of a river within sight of each other.
The current president, Denis Sassou Nguesso, has ruled for 26 of the past 36 years.  He first became president in 1979 after the previous incumbent was forced from power.  Sassou aligned the country with the Eastern Bloc and signed a twenty-year friendship pact with the Soviet Union.  Pascal Lissouba became Congo’s first elected president from 1992 to 1997.  In mid 1997, civil war broke out and Lissouba and Sassou fought for power.  During the 4 month conflict much of Brazzaville was destroyed or damaged and it caused tens of thousands of civilian deaths.  In October 1997 the Lissouba government fell and soon thereafter, Sassou declared himself president once again.  In 2015 a referendum to change the constitution was approved, allowing Sassou to run for a third consecutive term in office.  The opposition claimed the government’s ‘approval’ statistics were false.
Tourism is still relatively in its infancy in the Republic of Congo despite it’s diversity.  It boasts beautiful landscapes characterised by undulating virgin rainforest, waterfalls, lagoons, river rapids and swamps.  The highlights include Nouabalé-Ndoki National Park (home to elephants, apes, gorillas, chimpanzees and bongo forest antelopes), Basilique St. Anne in Brazzaville, Conkouati-Douli National Park and The Gorges of Diosso, spectacular cliffs formed by the erosion of the sea.
Congolese cuisine incorporates French, Asian and Arabic influences into more starchy, traditional African fare.  Some of the specialities include Mwamba (stew of chicken, beef or lamb), Chickpea salad and Muamba Nsusu (chicken soup).  I opted to cook Mbisi Ye Kalou (fish stew) which I served with little roasted potatoes (not very Congolese I know, but my lovely Irish husband wouldn’t be too keen on fufu or cassava).
Rating: 6/10.  Even though it had chilli, it was quite bland in flavour.
Serves 4
Prep time: 10 minutes
Cook time: 40 minutes
4 firm white fish fillets
1 large onion, sliced
1 green pepper, seeded and sliced
4-6 tablespoons butter or oil
1 red chilli or 1 tsp crushed chilli flakes
250g baby spinach
1 cup water
In a medium saucepan, fry the onion and green pepper in 2 tbsps of the oil or butter.
Add chilies, spinach and water. Cover it and simmer for about 10 minutes.
Add 2-4 tbsps of oil or butter and the fish.
Continue to simmer, covered for about 20 minutes or until fish flakes easily. 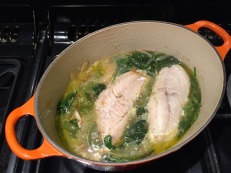 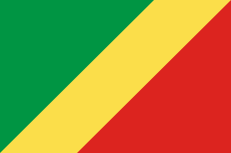 February 11, 2016January 31, 20171 Comment
The Seychelles has been on my personal bucket list for quite some time.  Being a fan of relaxing in the sun and watching beautiful sunsets, the islands of the Seychelles look idyllic.  However, it has a lot more to offer visitors, than just beach paradise.  There are 115 islands, most of which are not permanently inhabited.  Almost half of the landmass of the country is made up of national parks and reserves.
Bird Island is home to the heaviest land tortoise living in the wild – Esmerelda, who weighs in at a whopping 670 pounds (47.8 stone).  A few of the more popular islands to visit include Mahe, La Digue, Fregate & Praslin.  One of Mahe’s highlights is Morne Seychellois National Park which contains coastal mangrove forests as well as the country’s highest peak, the Morne Seychellois (905m).
Seychelles is the right place to visit if you want to see unique endemic species. These include the paradise flycatcher, the warbler, the jelly fish tree and the female Coco de Mer, which is the world’s heaviest nut.
Until the opening of the international airport on Mahé in 1971, the Seychelles Islands were entirely dependent on the sea for their links with the rest of the world.  By 2004, there were 15 airports.  In 2013, 230,000 tourists visited the Seychelles, 12,500 came from the UK.
Seychellois cuisine has been influenced by African, British, French, Indian and Chinese cuisines.  Fish & seafood are very popular and spices play an integral part in flavouring dishes.
A big thanks to Rakesh Shah, who shared an authentic recipe from his uncle for Red Snapper.
Rating: 7/10
Red Snapper Seychelles style!

Heat oven to 350ºF. Spray 8-inch square baking dish with nonstick vegetable cooking spray. Arrange snapper skin-down in dish. Set aside.
Combine shallots, garlic and oil in 10-inch nonstick skillet. Cook over medium for 3 to 4 minutes, or until shallots are tender-crisp, stirring frequently. Remove from heat. Stir in juice, parsley, paprika, cumin and pepper. Pour shallot mixture over snapper.
Arrange tomato slices evenly over snapper.
Cover dish with foil and bake for 20 to 25 minutes, or until fish is firm and opaque and just begins to flake.
Serves 4 as a starter or 2 as a main.