The Federation of Saint Kitts and Nevis is a dual island country in the West Indies known for cloud-shrouded mountains and beaches. It is the smallest country in the Caribbean (and indeed in the whole of the Americas), covering just 104 square miles, and is home to around 45,000 people. Both islands were discovered by Christopher Columbus on his second voyage to the New World in 1493.

Cricket is common in Saint Kitts and Nevis and was the smallest country to host 2007 Cricket World Cup matches at the capital, Basseterre’s stadium. Top players can be selected for the West Indies cricket team.

St. Kitts is dependent upon tourism to drive its economy. Tourism to the island has been expanding since 1978. In 2009 there were 587,479 arrivals to Saint Kitts compared to 379,473 in 2007, representing an increase of just under 40% in a two year period. The two biggest occasions in the social calendar are the St. Kitts Music Festival, held in June and now in its 20th year and the St. Kitts-Nevis National Carnival, also known as Sugar Mas, which takes place around Christmas and New Year.

Local St Kitts and Nevis cooking is simple, spicy and makes use of the plentiful fresh fish, vegetables and fruit. Some specialities include Droppers (coconut dumplings), Stewed saltfish, Goat waterstew (goat and tomato based stew), Cook up or Pelau (chicken, pigtail, saltfish with rice and vegetables), Rikkita beef (fried beefsteak marinated in Champagne and hot peppers), Conkies (cornmeal savoury snack) and Coconut rum bread pudding. I decided to make Jam Cake, which was full of lovely spice and nuttiness.

Mix all ingredients (except the jam) together in the bowl of a stand mixer fitted with a paddle (or by hand with a wooden spoon).
Pour into 2 greased and floured 9-inch cake pans
Bake at 175 C for 35 minutes
Leave the cakes to cool then take them out of the pans on to a wire rack

To make the icing
Add the butter, cream and brown sugar to a pan and heat for 2 minutes, stirring to combine
Sift the icing sugar and beat into the mixture

The Kingdom of the Netherlands is a small densely populated country in Western Europe with three Island territories in the Caribbean – Bonaire, St Eustatius and Saba. The Netherlands consists of twelve provinces including North Holland and South Holland. In 2013, the United Nations World Happiness Report ranked the Netherlands as the fourth happiest country in the world, reflecting its high quality of life.

A few interesting facts:
More than a quarter of the Netherlands is below sea level, 50% of its land lies less than one metre above sea level
The Dutch are the biggest licorice eaters in the world consuming 32 million kilos every year
The Netherlands is the second largest beer exporter in the world, after Mexico, with an export value of $2.1 billion
Dutch men are the tallest in the world, with an average height of 184cm. Researchers say it’s down to their DNA, nutrition and welfare
KLM (Koninklijke Luchtvaartmaatschappij or “Royal Airline Company”), the Dutch national airline, is the oldest national airline in the world, founded in 1919
The Netherlands produces around 60% of the world’s supply of flower bulbs, and its trading companies account for 85% of the international trade

The Netherlands is known for a flat landscape of canals, tulip fields, windmills and cycling routes. The Vaalserberg is the highest point in the European part of the Netherlands, it’s only 322.7 meters high and is located in the province of Limburg. Amsterdam, the capital, is home to the Rijksmuseum, Van Gogh Museum and the house where Jewish diarist Anne Frank hid during WWII. Canal side mansions and a trove of works from artists including Rembrandt and Vermeer remain from the city’s 17th-century “Golden Age”.

Preheat the oven to 190c
Heat the water and the butter in a saucepan over medium heat
Bring to a boil, then take off the heat and add the flour stirting until it all comes together in a ball
Add a pinch of salt, stir in the egg and continue to stir until the dough has absorbed all the egg and is fully blended together
Line a baking sheet with parchment paper, divide the dough intp four balls and place it on top of the parchment
Bake in the oven for about 20-25 minutes or until puffy and golden
Remove and cool on a rack
In the meantime, beat the whipping cream and the sugar until stiff
Fill a pastry bag with small tip, cut a small hole through the bottom of the cooled balls and fill with whipped cream
Heat the chocolate chips and a tablespoon of water in the microwave (30 seconds on medium), stir until the chocolate has melted and the sauce has come together
Then carefully take the cream-filled Bossche bollen and dip, head first, into the chocolate
Or leave them on a rack and slowly pour the chocolate over the top, one spoonful at a time
Cool in the fridge for about 20 minutes or until the chocolate is solid and everything has had a chance to firm up

Situated off the west coast of Africa, Cape Verde is made up of 10 volcanic islands and 5 islets.  It was discovered by the Portuguese mariners in 1456.  Half of the population live on the largest island, Santiago.  The combined area of all the islands is 1,557 square miles.  It forms part of the Macronesia group of islands, which also includes the Canaries and the Azores.  Cape Verde’s best beaches are found on the islands of Boa Vista and Sal.  Although Sao Pedro on São Vicente is also worth a visit.

Cape Verde is home to the Mediterranean monk seal, the northern bald ibis, the green sea turtle, and the hawksbill turtle, all of which sadly, are endangered.

Mussolini the Italian dictator bought the rights to build an airport on Sal, Cape Verde as he needed to refuel his aircraft on the flights between Europe and South America. Portugal bought the airport back off him in 1945.

Corn is the staple food of Cape Verde. The national dish, cachupa, is a stew of hominy, beans, and whatever meat or vegetables may be available.  Other recipes I came across were Buzio (fish stew), Bol de cus-cus (corn & sugar cake) , Cado de Peixe ou Caiderado (vegetables cooked with fish) and Canjo (soup). I decided to cook Gufong (fried pastry) and served them with a chocolate sauce.

In a saucepan combine the water and sugar and bring to a boil.
Once it is boiling add in the semolina flour until it is well mixed then add the plain flour.
Add a dash of salt and baking powder and continue mixing until everything is well combined.
Let the mixture cool.
Once the mixture is cool, take a small piece of the dough and roll them into small finger sized logs on a floured surface.
Heat up your oil in a frying pan or you can use a deep fryer
Cook until golden brown.
Drain on a paper towel
Serve warm with coffee or tea and if you would like drizzle some chocolate syrup and powdered sugar to taste. 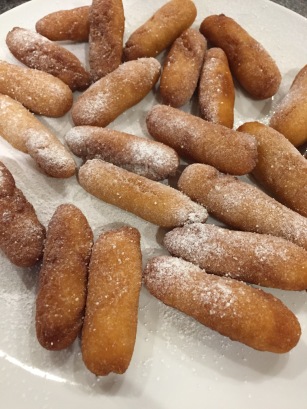