Palau is an archipelago of approximately 250 islands, part of the Micronesia region in the western Pacific Ocean. The total land area of Palau is 189 sq miles. Its most populous islands are Angaur, Babeldaob, Koror and Peleliu. About 70% of the population live on Koror. The population of Palau is approximately 21,000, of whom 70% are native Palauans of mixed Melanesian, and Austronesian descent.

Saltwater crocodiles are indigenous to Palau and occur in varying numbers throughout the various mangroves and parts of the beautiful rock islands. Although the species is generally considered extremely dangerous, there has only been one fatal human attack in Palau within modern history, and that was in the 1960s. The largest crocodile in Palau measured in at 4.5 metres (15 ft) long.

In September 2009, Palau announced that it would create the world’s first shark sanctuary. The sanctuary protects about 600,000 sq km of ocean. Palau is home to 135 endangered or vulnerable shark and ray species.

Several television programmes and films have been shot in Palau, including the reality show ‘Survivor: Palau’ in 2005 and the 1968 film ‘Hell in the Pacific’ starring Lee Marvin.

In a deep fryer or deep skillet, heat oil to 350 F or until hot
In a large bowl, beat eggs, milk, and vanilla
Sift flour, sugar, baking powder and salt into a separate bowl, stir and add to egg mixture
Mix until dry ingredients are moistened and dough is smooth
Drop teaspoonfuls of dough into the hot oil, fry until golden brown and doughnuts rise to the surface
Drain on paper towel lined plates and serve hot, but they are also good cooled down

Belize, formerly British Honduras, is a country on the eastern coast of Central America. With a population of around 368,000 it has the least population density in Central America. Mayan culture persists despite nearly 500 years of European domination. The area that is now Belize included three distinct Maya territories: Chetumal province, Dzuluinicob province and a southern territory controlled by the Manche Ch’ol Maya. Impressive Mayan archaeological ruins can be found in the forms of “El Castillo” at Xunantunich and “Caana” at Caracol.

Belize has the longest barrier reef system in the Western hemisphere. At 190 miles long it is the second longest in the world and home to 70 hard coral species, 36 soft coral species and 500 species of fish. 60% of Belize’s land surface is covered by forest and 37% of it’s territory falls under some form of official protection. The Cockscomb Basin Wildlife Sanctuary is a nature reserve, founded in 1990 as the first wilderness sanctuary for the jaguar.

Popular recipes in Belizean cuisine include Stew chicken, Stewed Rice and Beans, Panades (corn dough stuffed with fish, chicken or beans), Chimole (‘black dinner’ or chicken soup), Sere (fish soup), Shrimp fritters and the rather unpleasantly named Bile up or boil up (boiled eggs, fish and/or pig tail, with cassava, sweet potatoes, plantains and tomato sauce). I opted to make Fry Jacks (deep fried dough) which are a traditional Belize breakfast food. The kids enjoyed them with icing sugar and chocolate spread. I had them with sausages and even though they were sweet, the combination of flavours was really good.

In a large bowl mix together the flour, sugar, baking powder and salt. Add shortening
Then make a well then add milk, knead dough for about 30 seconds to 1 minute to form soft dough
Divide dough into 7-8 equal pieces and set aside for about 10 mins
Place each one piece on a heavily floured board and roll out dough into a rough circle
Divide the circles in half and then cut a slit through the middle of the rolled out dough
In a large saucepan pour vegetable oil, until it is at least 3 inches or use a deep fat fryer and heat until oil is 350 degrees
Fry until golden brown about 3-5 minutes depending on size
Remove with a slotted spoon and drain on paper napkin. Let them cool
Serve with your choice of spreads. They also go well with sausages and bacon. 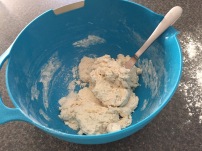 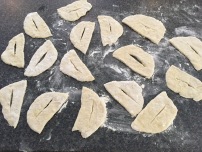 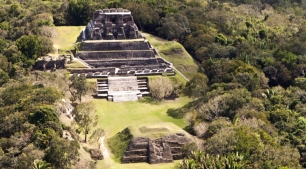 Malawi lies landlocked in southeast Africa.  It was formerly known as Nyasaland.  The name Malawi comes from the Maravi, an old name of the Nyanja people that inhabit the area. The country is also nicknamed “The Warm Heart of Africa”.  Lake Malawi, which takes up a third of Malawi’s area is a huge freshwater lake, lined with excellent beaches and filled with colorful fish, as well as the occasional hippo and crocodile.   Lake Malawi was once called “The Lake of the Stars” by the famed Scottish explorer David Livingstone, because lantern lights he saw from the fishermen’s boats resembled the stars at night.

Malawi has been independent from Britain since 1964.  President Hastings Kamuzu Banda ruled for more than 25 years until democratic elections in 1994 brought in new leadership.

Apparently Malawi is the only country in the world that has a Carlsberg factory (with the exception, of course, of Denmark) – so Carlsberg beer is sold here at just about 35p!

Highlights for the visitor are aplenty with several wildlife national parks and reserves (Nyika, Nkhotakota, Lilongwe and Majete to name a few), the beaches of Likoma Island, Mt Mulanje and the impressive Manchewe Falls.

Popular cuisine of Malawi includes different types of fish, nsima (ground corn), kachumbari (tomato & onion salad) and kondowole (cassava flour & water). They also enjoy tea & coffee, so I opted to cook a dish called Mandasi (doughnuts) which are generally served with a hot drink.  We had some family visiting for the weekend so I served these for breakfast alongside Yovo Doko fritters from Benin and the kids really tucked in!!

Mix the flour, salt, baking power in a bowl. Add the sugar, egg, milk and beat until smooth.
Drop spoonfuls of the batter into a deep fat fryer with hot oil and fry until golden brown, turning once.
Drain on kitchen towel and serve with a dusting of icing sugar. 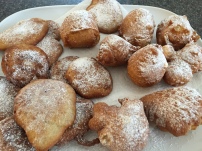 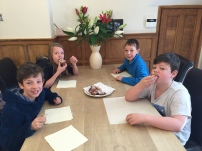 The kids tucking into breakfast 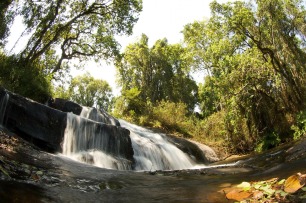 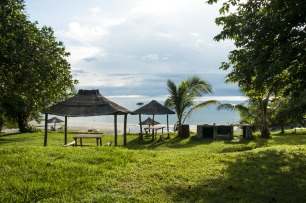 Lake Malawi
January 24, 2016January 31, 2017Leave a comment
Panama is the only place in the world where you can see the sun rise on the Pacific and set on the Atlantic.  It has 5,637 kilometers of coastline and more than 1,518 islands so it boasts plenty of beaches.
The Panama Canal was built by the US Army Corps of Engineers between 1904 and 1914.  It is 44 miles long and there are 3 sets of locks of 33.5 metres (110 ft) width.  It generates one-third of Panama’s entire economy and serves passage to almost 14,000 ocean-going vessels per year.  The Panama Hat is actually made in Ecuador.
The Panamanian recipes I came across were Sancocho (local stew), Tamales (corn dough rolls) & Corvina (local sea bass).  There were also a fair few different breakfast recipes, namely Arepas (corn flatbread topped with egg), Bistek Picado (chopped beef) & Salchichas (sausages).  As it was the weekend and the kids were with us, I decided to cook these easy Hojaldras (doughnuts).
Rating: 8/10
2 cups of flour
1 tsp of baking powder
1 tsp of white sugar
1 tsp of salt
1 tbsp of oil
½ cup of water
Oil for frying
Mix the flour, baking powder, sugar and salt.  Mound the ingredients and make an indentation in the middle.
Add the oil and one tablespoon of the water.
While kneading, add the water a tablespoon at a time, until the dough no longer sticks to your hands.
Form dough into a ball, cover bowl with a cloth, and let it rest for two hours.  (After the two hours, you can cover with plastic wrap and refrigerate the dough until the following day, if desired.)
When ready to fry, heat a few inches of oil in a pot over medium heat.
Form the dough into small balls (a little goes a long way), and use your hands to stretch them thin and flat, like pizza dough.
Carefully add the stretched dough balls, one or two at a time, and fry until golden on one side, then flip and fry the other side.  (It helps to place a screen over the pot to prevent oil spatters.)
Remove dough, and allow to cool slightly.
Enjoy your hojaldras plain, or with powdered sugar, cinnamon, or even bacon