The Dominican Republic is the second largest republic in the West Indies, after Cuba. It was called Santo Domingo (which is it’s capital) until the early 20th century.
Santo Domingo, founded in 1496, is the oldest European settlement in the Western Hemisphere and is home to the oldest operating Cathedral in the Americas, the Cathedral of Santa María la Menor, was completed in 1540.

A few interesting facts:
The Dominican flag is the only one to have a bible in it.
Francis Ford Coppola filmed scenes of the The Godfather Part II in Santo Domingo.
Dominican Republic is one of the worst 20 countries in the world for murders with a murder rate of 22.1 per 100,000 people, most probably due to drug smuggling.
It is the only place in the world where you can find Larimar, also called “Stefilia’s Stone”, a rare blue variety of the silicate mineral pectolite. It’s healing properties are said to cool and draw out inflammation from the body, reducing fevers and the heat of sunburn.

Dominican Republic is the most visited destination in the Caribbean with 5.1 million visitors in 2014. Highlights include the beautiful beaches at Playa Rincón and Punta Cana, Pico Duarte (the largest peak in the Caribbean), Cascada el Limon (waterfall), whale watching in Samaná and snorkelling the Cayo Paraiso (Paradise Island).

Some popular dishes I came across include Turkey a la Dominicana Stuffed with Rice and Pigeon Peas, Buñuelos de Yuca Recipe (Cassava ‘Beignets’ in Spiced Syrup), Locrio de Pica-Pica (Rice and Spicy Sardines), Dominican sancocho (meat stew) and Locrio de Pollo Dominicano (Dominican style Chicken with Rice). As it was Friday, and therefore we deserved a treat, I decided to cook Pica Pollo (fried chicken). It was crispy and tasty, but we felt it could’ve done with a bit more spice. 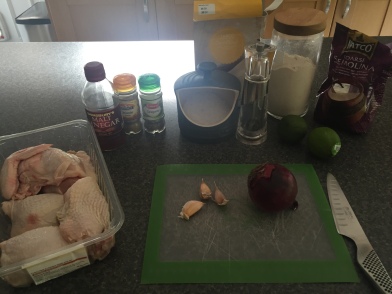 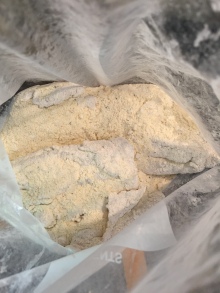