Skip to content
April 6, 2016January 31, 2017Leave a comment
The world’s most secretive country is situated in the northern part of the Korean Peninsula.  Early European visitors to Korea remarked that the country resembled “a sea in a heavy gale” because of the many successive mountain ranges that crisscross the peninsula.
After the Japanese surrender at the end of World War II in 1945, Korea was divided into two zones by the United States and the Soviet Union, with the north occupied by the Soviets and the south by the Americans. Negotiations on reunification failed, and in 1948 two separate governments were formed: the Democratic People’s Republic of Korea in the north, and the Republic of Korea in the south. An invasion initiated by North Korea led to the Korean War (1950–53). Although the Korean Armistice Agreement brought about a ceasefire, no official peace treaty was ever signed.  Both states were accepted into the United Nations in 1991.
North Korea has the highest number of military and paramilitary personnel in the world, with a total of 9,495,000 active, reserve, and paramilitary personnel.
It isn’t impossible to visit North Korea, however it isn’t straightforward.  Koryo Group offer group or independent tours to North Korea from China.
You can expect to pay from €1,800 for a 3 night basic tour departing from Beijing, including round-trip tickets to Pyongyang on Air Koryo, accommodation, guide fee, private transport, meals, and entry fees.  You cannot travel alone at any time, you must always be accompanied by 2 state employed guides.
A few of the highlights according to Lonely Planet include Paekdu (the country’s highest mountain and an extinct volcano with a vast crater lake at its centre), Pyongyang’s Juche Tower and the Arirang Mass Games annual event in May.
Korea cuisine is based on rice, meat & vegetables. Some of the recipes I came across include Dae Ji Bool Gogi (spicy marinated pork) , Chap Chee or Japchae Noodles (mixed vegetables with noodles) , Bulgogi (Korean grilled meat on skewers) and Naengguk (cold soup).  I decided to cook Kalbi (BBQ short ribs).  The recipe called for short cooking time, although the beef short ribs I bought stated they should be slow cooked.  The marinade was really tasty but our palates would’ve preferred the meat to be slow cooked.
Rating: 6/10
Serves 2 – 3
Prep time: 10 minutes + 3 hours or overnight marinating
Cook time: 25 minutes
1/2 cup soy sauce
1/2 cup brown sugar
1/2 cup water
1 garlic clove, minced
2 spring onions, chopped
1 tbsp toasted sesame oil
700g beef short ribs
In a bowl, stir together the soy sauce, brown sugar, water, garlic, green onions, and sesame oil until the sugar has dissolved.
Place the ribs in a large plastic zipper bag. Pour the marinade over the ribs, squeeze out all the air, and refrigerate the bag for 3 hours to overnight.
Preheat an outdoor grill to medium-high heat, and lightly oil the grate.
Remove the ribs from the bag, shake off the excess marinade, and discard the marinade.
Grill the ribs on the preheated grill until the meat is still pink but not bloody nearest the bone about 10 – 12 minutes per side.
Serve with boiled rice. 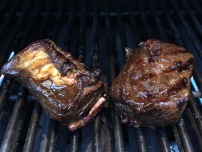