Situated off the west coast of Africa, Cape Verde is made up of 10 volcanic islands and 5 islets.  It was discovered by the Portuguese mariners in 1456.  Half of the population live on the largest island, Santiago.  The combined area of all the islands is 1,557 square miles.  It forms part of the Macronesia group of islands, which also includes the Canaries and the Azores.  Cape Verde’s best beaches are found on the islands of Boa Vista and Sal.  Although Sao Pedro on São Vicente is also worth a visit.

Cape Verde is home to the Mediterranean monk seal, the northern bald ibis, the green sea turtle, and the hawksbill turtle, all of which sadly, are endangered.

Mussolini the Italian dictator bought the rights to build an airport on Sal, Cape Verde as he needed to refuel his aircraft on the flights between Europe and South America. Portugal bought the airport back off him in 1945.

Corn is the staple food of Cape Verde. The national dish, cachupa, is a stew of hominy, beans, and whatever meat or vegetables may be available.  Other recipes I came across were Buzio (fish stew), Bol de cus-cus (corn & sugar cake) , Cado de Peixe ou Caiderado (vegetables cooked with fish) and Canjo (soup). I decided to cook Gufong (fried pastry) and served them with a chocolate sauce.

In a saucepan combine the water and sugar and bring to a boil.
Once it is boiling add in the semolina flour until it is well mixed then add the plain flour.
Add a dash of salt and baking powder and continue mixing until everything is well combined.
Let the mixture cool.
Once the mixture is cool, take a small piece of the dough and roll them into small finger sized logs on a floured surface.
Heat up your oil in a frying pan or you can use a deep fryer
Cook until golden brown.
Drain on a paper towel
Serve warm with coffee or tea and if you would like drizzle some chocolate syrup and powdered sugar to taste. 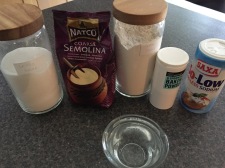 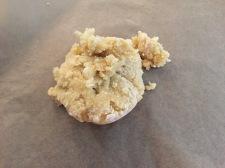 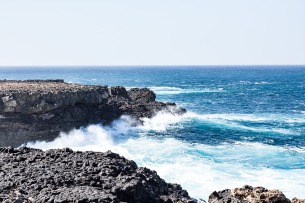