India, the seventh largest country by area and second largest by population with over 1.2 billion people.

India was once a continent. More than 100 million years ago, when dinosaurs roamed the earth, most of what is now India was an island.  It had broken off from an ancient supercontinent, referred to as Gondwanaland by paleogeographers and was moving slowly northwards.  About 50 million years ago, the India continental plate collided with Asia, buckling the coastal area of both continents and creating the Himalayas.   Evidence of this ancient history is provided by fossilised sea shells that can still be found high in the mountains. The plate on which the subcontinent rests continues to press slowly northwards, and is the reason why the height of Mount Everest increases slightly every year.

India has three of the world’s top ten megacities – one more than China. According to the UN, Delhi is now the second-largest urban agglomeration in the world, with Mumbai ranked seventh and Calcutta tenth.  The population of Delhi and its immediate urban hinterland is now over 22.65 million, and is only surpassed by Tokyo.  The 486.6-million worker Indian labour force is the world’s second-largest, as of 2011.  The service sector makes up 55.6% of GDP, the industrial sector 26.3% and the agricultural sector 18.1%.

India’s telecommunication industry, the world’s fastest-growing, added 227 million subscribers during the period 2010–11, and after the first quarter of 2013, India surpassed Japan to become the third largest smartphone market in the world after China and the U.S.

There are more road deaths in India than any other country in the world.  Officially about 115,000 people die on Indian roads each year – though a recent British Medical Journal study suggests that the true number of fatalities is closer to 200,000.

India has the world’s largest film industry.  More than 1,100 movies are produced, on average, each year – that’s slightly ahead of Nigeria, twice as many as the American film industry and ten times as many as Britain produces.

Some interesting facts about the Taj Mahal:

Indian cuisine is hugely diverse and is known the world over.  Indian food differs across the various regions and is also heavily influenced by religious and cultural choices and traditions.  Thankfully with a little help from my friend Aditi, I chose to cook 3 dishes – Murgh Punjabi (chicken curry from Punjab), Peas Pulao (peas with rice) and Chana Saag (chickpeas with spinach).

Overall rating: 8/10.  The chana saag was a little too watery, so I have adjusted the recipe below with reduced water.

For the Murgh Punjabi:

Sauté chopped onions till dark brown in the oil

Add chopped tomatoes
Keep sautéing mixture till the tomatoes and onions are well cooked and start releasing the oil
This should take 15-20 mins
Wait for mixture to cool and grind to paste consistency in a mixer
In a deep bottom pan, take some oil, add chopped ginger and chopped garlic
Once golden brown add bay leaf, peppercorns, black cardamoms, cinnamon, cloves and the cumin seeds
Once the cumin seeds are sizzling, add the onion tomato paste that you made earlier
Let it all cool together for 2 mins and then add red chilly powder, chicken curry powder, freshly ground pepper and salt to taste
Sauté mixture for 3-4 minutes
Add washed chicken pieces to the pan now
Sauté for 7-8 minutes till all the pieces are nicely covered with the masala and are sealed
Now add water (half a cup of water if you want the curry to have a thick consistency and want to serve it with Indian bread or 2 cups of water (approx) if you want to serve it with rice and want it to be more liquids)
Now bring to boil and once it’s boiling, put a lid on and reduce the flame to low for the chicken to simmer and cook for 10-15 minutes.
Keep stirring occasionally to ensure it doesn’t stick to the bottom of the pan16. Once cooked, garnish with chopped coriander and juliennes of ginger

For the Peas Pulao:

In a deep bottom pan, heat the oil

Add the cumin seeds, once they start to sizzle, add the peas
Sauté for 2 minutes and add the rice
Add salt to taste and sauté the peas and rice to mix together
Add the water, bring to a boil
Let all the water get absorbed by the rice and peas and once you start to see holes in the rice, cover it with a lid and turn the flame off
Let it cook in its own steam for 7-10 mins, open the lid and spread the rice gently and turn it from top to bottom so that every rice particle can stand out separately and no lumps are formed
Put the lid again for another 4-5 mins
Your rice is ready, garnish with garam masala powder for aroma and flavour

For the Chana Saag:

Heat 1 tablespoon of olive oil in a tall stockpot.

Add the spinach leaves and 1/4 teaspoon salt.
Cook for about 5 minutes breaking down the spinach leaves until wilted and pulped but some liquid remains.
Remove to a separate bowl.
Heat 1 more tablespoon of olive oil in the same stockpot. Add the cumin seeds and fry for 1-2 minutes until they sizzle.
Add the chickpeas and 1 tsp salt.
Remove from heat and add the ground spices.
Return to heat and mix in the tomato puree and canned tomatoes.
Cook for 1-2 minutes and then add 1 cup water.
Cover and cook for about 10-15 minutes.
Add the spinach with its liquid and cook for another 5-10 minutes on low heat.
Taste and adjust salt and chili as needed. 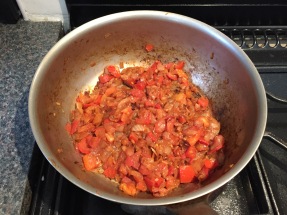 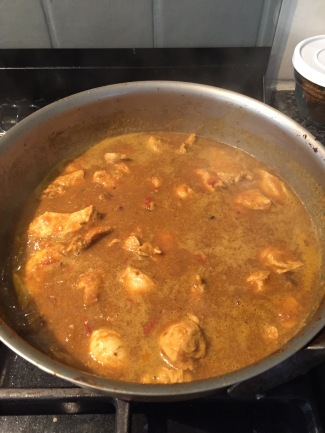 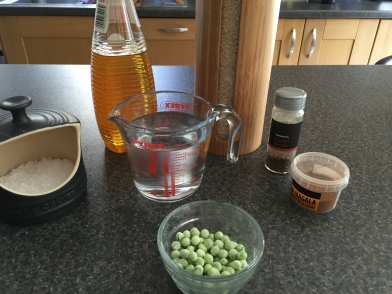 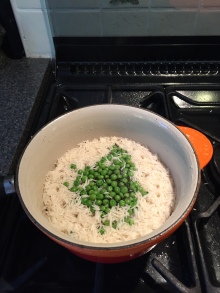 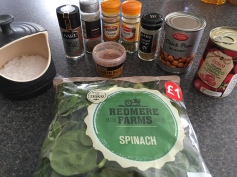 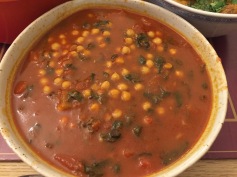 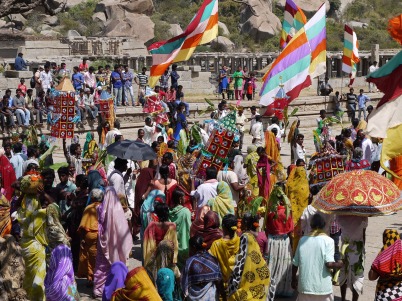