This is a land locked country, some say in North Africa, others say West Africa. Mali lies in the torrid zone and is among the hottest countries in the world. Most of Mali receives negligible rainfall and droughts are very frequent.

Mali has considerable natural resources, with gold, uranium, phosphates, kaolinite, salt and limestone. It has the third highest gold production in Africa (after South Africa and Ghana). Despite this, Mali is one of the poorest countries in the world with an average worker’s annual salary of approximately US$1,500.

Infamous Timbuktu, known as the remotest place on earth, is a city in Northern Mali. Goods from the Mediterranean shores and salt were traded in Timbuktu for gold from the 11th century. The prosperity of the city attracted African and Arabs who were both scholars and merchants. To sum it up, Timbuktu was the city of Divine light, the city of knowledge, the city of trade and the city of hospitality.
It is home to three of the oldest mosques in West Africa. The Centre de Recherches Historiques Ahmed Baba houses 23,000 Islamic religious, historical and scientific texts from all over the world. The oldest manuscripts date from the 12th century, but there are countless other priceless works. Mali is also home to the world’s largest mud brick building – the Great Mosque of Djenne, built in 1907 and became a Unesco World Heritage Site in 1988.

Rice and millet are the staples of Malian cuisine. Popular dishes include fufu (pounded cassava), jollof rice, and maafe (peanut stew). A friend of my sister has lent me a cookbook with many traditional recipes from countries all over the world (thank you Laurie).  I was pleased to find it included one for Mali called Meni-meniyong (Sesame seed sticks) which sounded quite tasty. Unfortunately they didn’t turn out well at all as they were far too sticky and soft to actually eat, so sadly the first recipe of the challenge to end up in the bin (the photo is deceptive!). 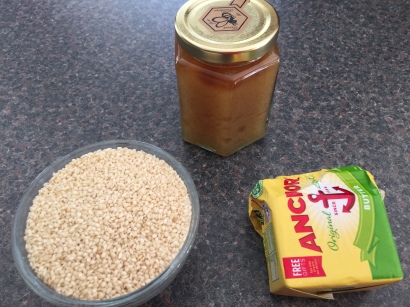 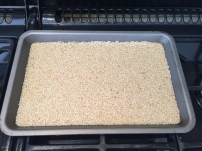