Jordan is situated in the heart of the Middle East, almost land locked but for a for a short coast on the Gulf of Aqaba. Officially The Hashemite Kingdom of Jordan since independence from Britain in 1946. King Hussein ruled Jordan from 1953 until his death in 1999, when his son King Abdallah II assumed the throne. Since 1989, all elements of the Jordanian political system have been on a road to greater democracy, liberalisation and consensus building.

The population of Jordan is estimated at 9.5 million as of 2016. Jordan plays host to enormous numbers of refugees, with 2 million Palestinians, 1.4 million Syrians, 700,000 Iraqis and 15,000 Lebanese. Archaeological evidence shows that humans have lived in what is now Jordan for at least 90,000 years through the Paleolithic and Neolithic periods. It has been ruled by the Mongols, the Crusaders, the Ayyubids, the Mamluks and the Ottoman empire.

Tourism in Jordan is affected by regional turbulence but despite this it is still considered to be a major influence on the economy. The most popular tourist attractions are the historical cities of Petra and Jerash. Other highlights include Madaba’s Byzantine era mosaics, the Dana Biosphere Reserve, Wadi Rum, Al-Maghtas and the Dead Sea.

The cuisine of Jordan has developed over the centuries. Popular ingredients include olive oil (they are one of the largest olive producers in the world), herbs, garlic, lemon, tomato sauce and yoghurt. Mansaf is the national dish (lamb cooked in a sauce of fermented dried yogurt called Jameed). Other dishes I came across were Mujaddara (lentil and rice casserole), Freekeh (poultry or meat fried in oil and braised with water, salt, and cinnamon bark) and Kousa Mahshi (meat stuffed courgettes). We had friends visiting for the weekend so I decided to do Mezze, which is a highly popular style of eating in Jordan. I made Kefta (spiced ground meat), Falafel (fried chickpea balls), Tabbouleh (bulgar wheat salad) and Cucumber & mint yoghurt dip. I served it all with flatbreads and pitta breads. It divided the group a little, but overall we enjoyed it.

Keftas
Preheat oven to 175c
Half the onion and cut about 1/4 of that half into thin slices, then the rest of the onion shred with a hand vegetable shredder OR chop, mince garlic and chop parsley, then add it to the meat
Add seasoning to the meat, salt, ground black pepper and allspice
Drizzle oil on top of the meat mixture and mix with your hands (you can put the mixture in a bag and massage it to avoid getting tpp messy).
Brush oil on the bottom of the baking pan, then press down the meat mixture, from one corner to the other until it is equally spread.
With two fingers, (index and middle) make little lines, from one end to the other. This will speed cooking process and in a way looks like boneless riblets.
Spoon over the passata, and spread equally on the top of the meat mixture, then place those thin onion slices on top, a sprinkle with salt and pepper and a little more parsley
Bake for about 20-25 minutes in the preheated oven. It will shrink from all the sides of the pan

Falafel
Soak the chickpeas and fava beans for at least six hours or overnight
Blend the soaked chickpeas and fava beans, onion, garlic, and chopped parsley into the food processor until all the ingredients are combined into a nice, thick paste
Empty the mixture into a bowl, add the salt and spices, and mix them well with a spatula
Add baking soda to the mixture and mix well
Scoop the mixture with a spoon or your hands to form ball shapes and deep fry them in vegetable oil until they are a nice golden brown colour 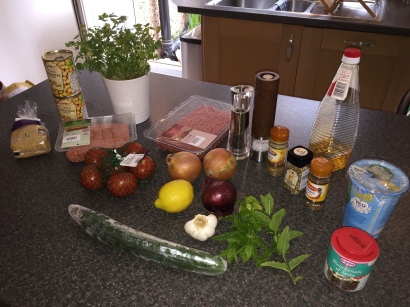 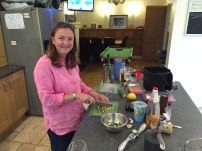 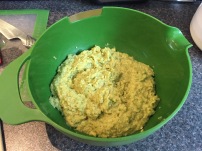 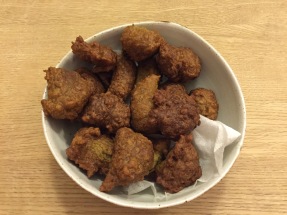 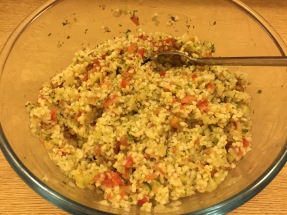 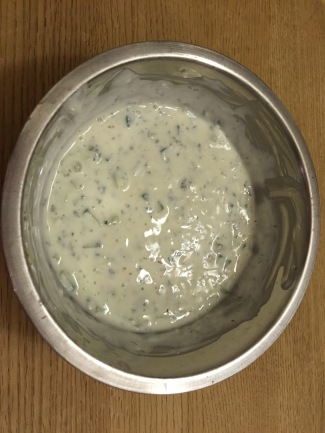