In 2002, I spent a few months travelling in Australia and had the pleasure of spending my 30th birthday in the small town of Broome in Western Australia. We rode camels on Cable beach, swam in the crystal clear water and ate Barramundi for dinner! Western Australia is less popular than the busy resorts on the eastern coast such as Byron Bay, The Whitsundays and The Gold Coast, but has so many beautiful places to explore. Just a few of my highlights include trying my hand at surfing (and failing epically) on Exmouth beach, tasting amazing wine in Margaret River, hiking in Kalbarri National park and dining out in the fabulous restaurants of Perth.

The Commonwealth of Australia is the world’s sixth largest country by land area and the world’s smallest continent. Inhabited by indigenous Australians potentially as far back as 125,000 years ago. It is the flattest and driest inhabited continent with the oldest and least fertile soils. The outback makes up by far the largest portion of land. Home to the Great Barrier Reef, the worlds’s largest coral reef system stretching over 2,300km which is visible from outer space. Quite surprisingly it has only the 6th longest coastline in the world at 25,760km, just pipping Norway at 25,148km. Canada has the longest at 202,080km.

Independent from the UK since 1901, it is one of the wealthiest countries in the world and 2nd highest on the human development index, which is measured by life expectancy, education, and income per capita. It generates its income from various sources including mining-related exports, telecommunications, banking and manufacturing. In terms of average wealth, Australia ranked second in the world after Switzerland in 2013.

A few facts:
There are more kangaroos in Australia than people!
You could visit a different beach in Australia every day for over 27 years
The Argyle diamond mine in the Kimberley is the world’s biggest producer of natural diamonds and contributes approximately one-third of the world’s natural supply
The Australian wine industry is the world’s fourth largest exporter of wine. Only 40% of production is consumed domestically
Of the top 10 deadliest snakes, 5 of them can be found in Australia, including the most venomous snake in the world, the Inland Taipan

Fortunately for me (and my husband) Australian cuisine has come on a long way since it’s indigenous hunter gatherer diet of ‘bush tucker’, with influences from the British, Mediterranean and East Asian cuisine. Meat is a core component of the Australian diet and the production of meat has been a significant part of Australia’s agricultural economy. Some dishes that are considered traditional Australian fare include Barbecued meat, Chiko rolls (deep fried savoury roll), Anzac biscuits , Damper (soda bread), Lamington cakes and Pavlova. I decided to make Aussie meat pies, served with tomato ketchup, as is tradition. There is actually an annual competition for the ‘Great Aussie meat pie’ which has been going since 1990 and now has 14 different categories. We thoroughly enjoyed ours, but I’m not sure if they were worthy of a competition entry!

Grease and line four 7.5cm round pie moulds with the shortcrust pastry, trimming any excess and put in the fridge
Using a food processor, blend the steak until it resembles mince
Heat oil in a large frying pan over medium-high heat
Add the onion and bacon and cook for 3 minutes, stirring occasionally
Add the mince and cook for 5 minutes stirring with a wooden spoon to break up the mince.
Stir in the tomato paste and flour and cook for 1 minute
Stir in the stock and thyme and bring to the boil
Reduce heat to medium-low and simmer for 15 minutes or until sauce has thickened and meat is tender
Season with pepper, remove from heat and let it cool for 10 minutes
Preheat oven to 200°C
Fill the chilled pies cases with the steak mixture and top with puff pastry, trimming any excess
Press the edges together with a fork to seal
Using a small sharp knife, cut a small cross in pie tops
Brush with egg and bake for 25 to 30 minutes or until golden
Serve with tomato ketchup 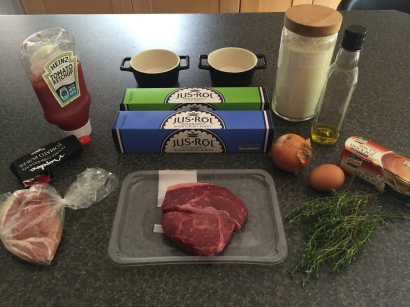 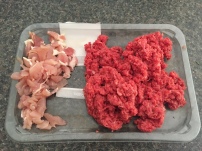 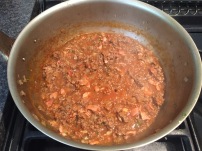