Namibia, “Land of the Brave” according to the national anthem, is situated in southern Africa between the Namib and the Kalahari deserts. The Namib (meaning “vast place”) coastal desert is one of the oldest in the world, it’s sand dunes are the highest in the world and they are a rich source of diamonds. The Sperrgebiet (meaning “Prohibited Area”) National Park, also known as Diamond Area 1, was created by the Germans in 1908, it was then taken over by the South Africans and De Beers had full ownership until the 1990s when the Namibian government bought a fifty percent stake, forming a partnership called the Namdeb Diamond Corporation. Namibian diamonds are the highest valued in the world and were worth $550 dollars per carat in 2012 vs Russian diamonds (the world’s largest producer) at $82 per carat.

A few other interesting facts:
Namibia is the second least densely populated country in the world after Mongolia
It has the largest number of cheetahs in the world
Namibia is one of only two countries in the world that has desert dwelling elephants
‘Hoba’, the world’s largest intact meteorite landed in Namibia weighing over 60 tonnes
It is the fifth largest producer of uranium in the world and is expected to become the second largest once the Husab mine reaches full production in 2017

Highlights for the tourist include the sand dunes at Sossusvlei, Spitzkoppe (the ‘Matterhorn of Africa’), the Skeleton Coast, Etosha National Park and the Fish River Canyon gorge. In 2010, Lonely Planet named Namibia the 5th best tourist destination in the world in terms of value.

Namibian cuisine varies by region but staple foods include pap (porridge), meat, game and fish. A few dishes I came across were Potjiekos (small pot stew), sheep’s tails, veldt bread and Namibian black eyed peas. However, I decided to have a go at ‘Kapana’ which is simply grilled meat, generally beef. It is a highly popular street food found in the Windhoek Katutura area. It can be served on its own, with spices or with vetkoeks (fat cakes). A special thanks to Chantel from the Namibian Chefs Association who gave me some advice to ensure it’s authenticity. Even though we have a fabulously large gas BBQ, I bought a disposable charcoal BBQ so it had the ‘real’ taste. We thought the vetkoeks were a little sweet and overpowered the meat, but were a very tasty treat for breakfast the next morning!

For the vetkoeks
Sieve flour and combine all the dry ingredients in a big bowl
Add the oil and then water bit by bit until you get the consistency of a soft bread dough. The mixture must still be quite sticky.
Place the dough on a floured surface and gently knead for 5-10 minutes
You may need to add a little more flour to the dough to prevent it sticking to your fingers
Place the dough in a clean bowl and cover with a cloth and set aside in a warm place until the dough has doubled in size, about 1 – 2 hours
Divide the dough into 4 portions and mould into balls
Deep fry a few vetkoek at a time over a medium/low heat until golden brown, about 10 minutes 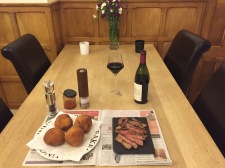 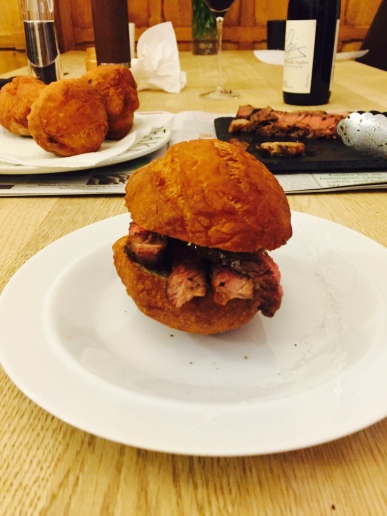