The volcanic island of Dominica is located in the eastern Caribbean Sea and is a sovereign Island country. Much of the island is blanketed by untamed rainforest. There are very few beaches, no flashy resorts and no direct international flights, which is probably the reason it has been spared mass tourism, with the exception of cruise ships, which dock in the capital, Roseau. This mountainous island has been nicknamed the “Nature Island of the Caribbean” for its unspoiled natural beauty. Dominica is home to many rare plants, animals and bird species. The Sisserou Parrot, the Island’s national bird, is found only in Dominica.

Morne Trois Pitons National Park is home to the world’s second largest hot lake, aptly named ‘Boiling Lake’. On 6 July 2007, adventure-film maker George Kourounis became the first person to ever cross the boiling lake from above, suspended by ropes over the most violently boiling section. One of the most impressive and photogenic waterfalls on the island, the Victoria Waterfall is also in Morne Trois Pitons National Park. It is formed by the White River cascading over a cliff into a warm pool below and minerals give the water a milky white color.

Music and dance are important facets of Dominica’s culture. Since 1997 there have been many Creole Festivals such as “Creole in the Park” and the “World Creole Music Festival” which is held annually over 3 days.

Rub the chicken with the lime, getting lime juice into all the crevices
In a bag, add the chicken, oregano, onion, celery, salt and garlic and marinate in the fridge for 30 minutes
In a pot heat the oil over medium heat, add sugar and wait until it browns
Add the chicken (reserve all the other things in the marinade) and fry until the meat is light brown
Add 2 tablespoons of water, then cover and simmer over medium heat for 15 minutes, stirring and adding water by the tablespoon every 5 minutes
Add the remaining marinated vegetables along with the tomatoes and green pepper
Cover and simmer for 10 minutes, adding water by the tablespoon and stirring every 5 minutes
Add the chopped tomatos and half a cup of water, simmer over low heat for 15 minutes
Remove from the heat, sprinkle with fresh coriander and season with salt and pepper to taste
Serve with steamed rice or green salad 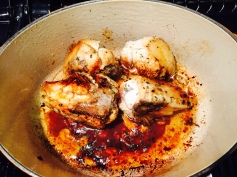 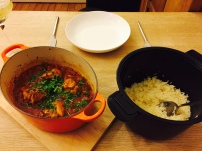 One thought on “Dominica”