The Marshall Islands are a sprawling chain of volcanic islands and coral atolls in the central Pacific Ocean, between Hawaii and Australia. The Islands include the Ratak (sunrise chain) and Ralik (sunset chain), two parallel chains of 29 atolls, each made up of many small islets, and five single islands. The Islands of Bikini and Enewetak are former US nuclear test sites.The Kwajalein Atoll, with a huge central lagoon, is the largest coral atoll on the planet, also famous as a WWII battleground, and the US maintains a strong military presence here with a missile testing range. The island city of Ebeye is the second largest settlement in the Marshall Islands, after Majuro which contains the capital, and is one of the most densely populated in the Pacific.

Islands in the archipelago were first explored by Europeans in the 1520s with Spanish explorer Alonso de Salazar sighting an atoll in August 1526. Other expeditions by Spanish and English ships followed. The islands derive their name from the British explorer John Marshall, who visited in 1788. The islands were historically known by the inhabitants as “jolet jen Anij” (Gifts from the God).

In October 2011, the government declared that an area covering nearly 2,000,000 square km of ocean shall be reserved as a shark sanctuary. This is the world’s largest shark sanctuary, extending the current worldwide ocean area in which sharks are protected from 2,700,000 to 4,600,000 square km. In protected waters, all shark fishing is banned. However, some have questioned the ability of the Marshall Islands to enforce this zone.

For almost 40 years the islands were under US administration. In 1979, the Government of the Marshall Islands was officially established and the country became self-governing. In 1986, the Compact of Free Association with the United States entered into force, granting the Republic of the Marshall Islands its sovereignty. Under the terms of that agreement, the US would provide significant financial aid, that to date now exceeds $1 billion.

When it comes to recipes, this was one of the toughest I’ve found in terms of research. There’s virtually no information on the internet relating to authentic recipes from The Marshall Islands, so using common ingredients from the area and with a little help from other people doing a similar challenge, I opted to cook Coconut Fish with Roasted Sweet Potato. It was unusual in flavour, not unpleasant, but for a reason I cannot explain, I wouldn’t be rushing to have it again.

Mix cornflour to a paste with a little of the cold coconut cream
Put the coconut cream, chopped onion, 1 tsp salt, chilli, lemon juice, and the cornflour mix in a saucepan
Bring the mixture to a gentle boil, stirring all the time, don’t allow the sauce to boil hard as it will become lumpy
Simmer for 3 minutes, then remove from the heat
Heat oven to 160 C (300F)
Put your sweet potatoes on a baking tray and bake for 40 – 60 minutes (depending on the size)
Cut fish into even sized pieces (about 2 cm thick, 3cm wide & 6 cm long)
Mix flour, extra salt & white pepper in a sealable plastic bag
Place the fish in the bag and shake well until the fish is evenly coated with the flour mix
Heat the peanut oil in a frying pan
Brown fish rapidly & lightly on all sides in the hot oil
Place the fish in an ovenproof dish as it is browned
Evenly cover the fish with the tomato slices
Pour the coconut sauce over the top
Bake uncovered in the oven for 30 minutes or until the top begins to brown
Serve with the roasted sweet potatoes 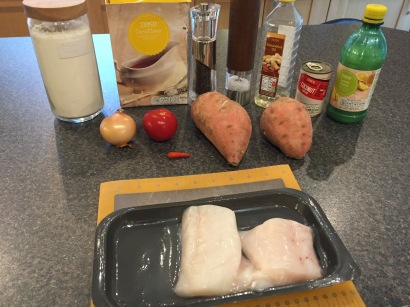 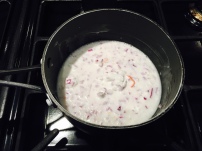 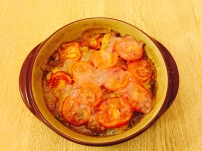 Map of The Marshall Islands