Ukraine, the largest country in Europe (excluding Russia) is 603,628 square kilometres with a coastline of 2,782 kms.  It borders the Black Sea, Poland, Romania, and Moldova in the west and Russia in the east.  The geographic center of Europe is considered to be in a small Western Ukrainian town called Rahiv.  Ukraine’s population has been declining since the 1990s because of its high death rate and a low birth rate. The population is shrinking by over 150,000 annually since 1993.  Ukrainians are of Slavic origin. About 75% of the population is ethnic Ukrainian. The largest minority group is the Russians at about 20%.

The territory of modern Ukraine has been inhabited since 32,000 BC. During the Middle Ages, the area was a key centre of East Slavic culture, with the powerful state of Kievan Rus’ forming the basis of Ukrainian identity.  It has been ruled and divided by a variety of powers, including Lithuania, Poland, the Ottoman Empire, Austria-Hungary, and Russia.  It is currently in territorial dispute with Russia over the Crimean peninsula which Russia annexed in 2014 but which Ukraine and most of the international community recognise as Ukrainian.

Ukraine suffered the world’s worst recorded nuclear accident. On the morning of April 26, 1986, reactor No. 4 at the Chornobyl Nuclear Power Plant, 80 miles north of Kiev, exploded, sending radioactive contaminants three miles up into the atmosphere and out over parts of Europe, Asia, and North America.

For the visitor it offers a diverse range of sights and activities namely; the Carpathian mountains and National Park, the 16th century Khan’s Palace, Yalta, the laid back beach resort, the quaint town of Lviv, a Unesco World heritage site and Kyiv, the capital with plenty of cultural points of interest.

The diet of Ukraine features chicken, pork, beef, fish and mushrooms.  Popular traditional dishes include varenyky (dumplings), nalysnyky (filled pancakes) and of course chicken kiev.  Some other recipes I came across were Kruchenyky (meat rolls), Pyrizhky (stuffed pastry buns) and Shynka (baked ham).  I opted to cook Mazuricks (turkey cutlets with cheese), which I served to a number of guests as a bit of a snack along with drinks and they went down extremely well!

Put the turkey mince into a mixing bowl. Melt the butter and add to the meat, stir well.
Add the eggs, milk, salt, pepper, flour and cheese to the meat. Stir well until fully combined.
Shape into balls, sausages or patties and roll in breadcrumbs.
Put them into bowl with a tightly fitted lid and store into fridge for 40 mins.
Heat the vegetable oil in frying pan, add thyme twigs and garlic.
Once garlic is browned, remove it from the oil along with thyme.
Fry the mazuricks on both sides in the flavoured oil, approximately 10 – 15 minutes (depending on the size).
I wasn’t serving them straight away, so I heated them up in the oven on 170c for 10 minutes before serving. 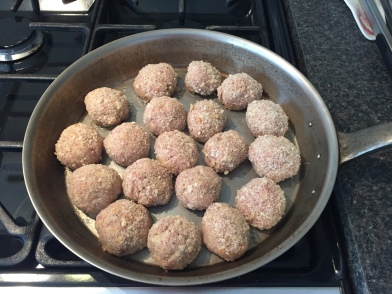