Belarus (meaning “White Russia”) is a landlocked country in Eastern Europe bordered by Russia to the northeast, Ukraine to the south, Poland to the west, and Lithuania and Latvia to the northwest. Alexander Lukashenko has been the country’s president since 1994. Belarus has been labeled “”Europe’s last dictatorship”” by some Western journalists on account of Lukashenko’s self-described authoritarian style of government. Belarus is the only country in Europe which retains capital punishment in law and in practice.

About 40% of Belarus is covered by forests and it also has 11,000 lakes. About 70% of the radiation from neighboring Ukraine’s 1986 Chernobyl nuclear disaster entered Belarusian territory, and about a fifth of Belarusian land (principally farmland and forests in the southeastern regions) was affected by radiation fallout. Belarusians continue to suffer from high incidences of cancer and birth defects, and about 25 percent of the land is considered uninhabitable. The United Nations and other agencies have aimed to reduce the level of radiation in affected areas.

Most of the monuments in Belarus dedicated to Lenin. In every city there is a Lenin Street. Highlights for visitors to Belarus include Radziwill Palace Fortress, the Museum of the Great Patriotic War, the 16th century Mir Castle and the Chagall Museum (which houses some of Marc Chagall’s designs and lithographs but sadly there aren’t more Chagall paintings in Belarus because his work was banned by the Soviet government).
Belarus has four UNESCO-designated World Heritage Sites: the Mir Castle Complex, the Nesvizh Castle, the Belovezhskaya Pushcha (shared with Poland), and the Struve Geodetic Arc (shared with nine other countries).

Some of the recipes I came across for Belarus were Zrazy (stuffed meat rolls) , Mazurka (almond cake) , Machanka (pork stew) and Draniki (potato pancakes). I opted to cook Lazanki (Belarusian pasta). I served it with a mushroom, ham and cheese sauce. It was pretty simple and easy to make and tasted good. I would cook the pasta a bit less and make the sauce a bit looser next time! You could also add some saffron to the water before making the pasta in order to give it more of a pleasant colour, as it was a bit anaemic.

For the lazanki
Beat the egg.
Add 1/2 cup of water to the egg, add salt and flour (250 g) and then carry on adding flour in small quantities until the dough comes together.
Mix the dough with your hands and divide it into 3 equal parts.
Roll out all of the dough (use a pasta machine if you have one – keep flouring the dough as you put it through)
Cut the dough into small squares with a sharp knife.
Boil salted water, add the lazankis and cook for approximately 7 minutes (or 5 minutes if you like it a bit al dente).
Put lazankis onto the plates and pour over the sauce.

For the sauce
Put the flour & 50g of the butter in a saucepan over a medium heat and stir to a paste.
Add the milk slowly to form a sauce and keep stirring for 5 minutes. Remove from the heat.
Meanwhile heat a small frying pan and fry the bacon until browned, about 5 minutes. Remove to a plate.
Add remaining butter to the pan and fry the sliced mushrooms for 5 minutes.
Heat the sauce on a low heat and add the cheese to the sauce, mix it in, then add the bacon and mushrooms and stir through. 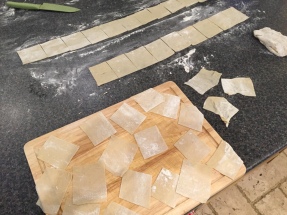 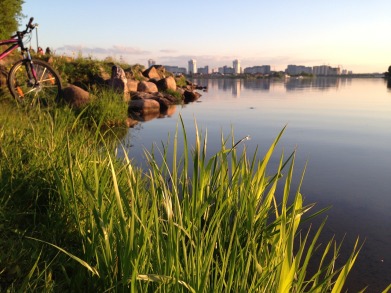 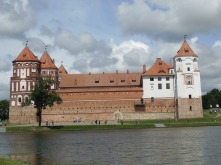 One thought on “Belarus”