The Kingdom of Belgium is located in Western Europe and the capital, Brussels, is home to the headquarters of the European Union and NATO.

The Belgian coastal tram Kusttram is the longest tram line in the world at 68km long. It opened in 1885 and operates between De Panne and Knokke-Heist, from the French border to the Dutch border.

The Law Courts of Brussels is the largest court of justice in the world. It has a built land area of 26,000 m² at ground level, which makes it bigger than the Saint Peter’s Basilica in Rome (21,000 m²).

Belgium has been producing chocolate for almost 400 years, with the first evidence of chocolate production dating back to 1635. Today Belgium produces over 220,000 tons of chocolate per year, and there are an estimated 2,000 chocolate shops.

Belgium holds the world record for the most lights lit simultaneously on a Christmas tree at 194,672 and was achieved by Kiwanis Malmedy / Haute Fagnes Belgium in Malmedy, Belgium, on 10 December 2010.

To make the mayonnaise:
In a large bowl, whisk mustard and egg yolk
Whisking constantly, slowly drizzle in oil in a thin stream until it begins to emulsify
Whisk in the vinegar, lemon juice, salt, and pepper
Set aside

To make the fries
Pour oil into a deep pan to a depth of 2″, and heat over medium-high heat until a deep-fry thermometer reads 375°
Add potatoes and cook until tender, about 8 minutes
Using a slotted spoon, transfer fries to a rack set over a rimmed baking sheet; chill
Increase oil temperature to 385°.
Working in batches, add chilled potatoes and cook until golden brown and crisp, about 4 minutes
Using a slotted spoon, return fries to rack and season with salt

To make the mussels:
Heat a 12″ high-sided skillet over high heat
Add mussels, wine, butter, celery, leeks, and onions
Season with salt and pepper, and cover skillet
Cook, shaking occasionally, until all mussels are opened, about 5 minutes
Divide mussels between 2 large bowls
Serve with fries and mayonnaise 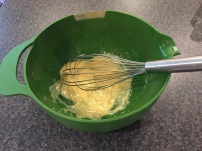 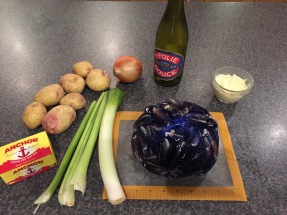 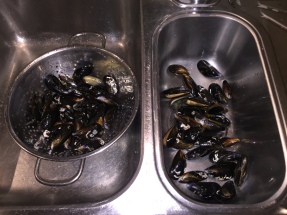 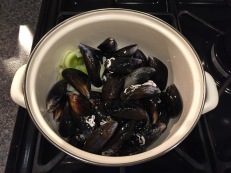